Using a render farm with the Cinelerra video editor

This blog post focusses on a very useful feature of Cinelerra, the render farm. These notes are based on Cinelerra 2.2CV on Gentoo.

A render farm enables multiple machines on a network to contribute to video rendering, speeding up this memory- and processor-intensive operation. Cinelerra enables the render farm to be used for both "background rendering" and for rendering of the final video.

As far as I can tell from the documentation, the render farm needs to be set up so that the output directory of the video rendering is the same on all machines on the render farm (which Cinelerra calls "nodes"). I achieve this by logging on with the same username on the master node and the client node (nfs server and nfs client).  Assume that the output of the video rendering is this directory on the machine you are using (the master node):

then all the machines must have this directory, including the same path.  Here  is an example of how the NFS share would be mounted on the client node:

Obviously with NFS you need to make the usual checks that the video output directory is contained in /etc/exports, that the directory is exported rw (read + write) and that the uid and gid (respectively for the user and user's group) match up.

The render farm also needs to be configured in Cinelerra. Below is a screenshot of my own configuration with some notes on the configuration underneath. 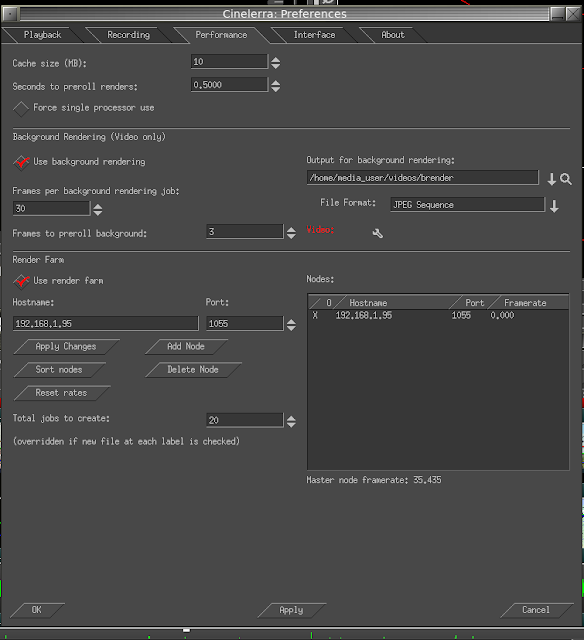 Cinelerra's documentation covers the configuration options fairly well, but there are a few things to watch out for. The option "Output for background rendering" must include the directory and the prefix of the rendered files. In our case, it's not enough to enter  "/home/media_user/videos". That would be interpreted by Cinelerra as the directory "/home/media_user" and the prefix for the rendered files as "brender" (with the individual files being named by Cinelerra as brender + number, e.g. brender001035).

I changed the default option for "Frames per background rendering job" to the uppermost value recommended by the documentation, which seems to work fine. I also changed "Frames to preroll background" from 0 to 3. The documentation recommends 0 but I found this failed to work properly on video where I was using the Ken Burns effect (zooming in or out). With a value of 0, the interpolation engine didn't work properly with the rendered video switching between a full size image and the size specified by the x y z projector values.

Cinelerra must be installed on all client machines. The syntax for initiating the daemon is:

cinelerra -d [port number]
In our case this would be:

Note the high number used for the port. A port number greater than 400 must be used in Linux if you want the Cinelerra daemon on the client node to be started as a non-root-user.  If root is initiating the process, the default note can be used (i.e. cinelerra -d without the port number will default to 400).

In conclusion, the render farm is a great feature of a great piece of open source software.